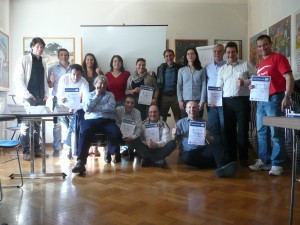 In our view the mixture of partners is great, there was a great atmosphere in the room but also between meetings andwe have managed to build close relationships very quickly.

The other very interesting thing is, that CVS Broxbourne and East Herts (CVS BEH) is the only organisation which is not sport related. CVS BEH is a charity which uses various tools to engage with its member groups, including migrant and sport associations.

During the first meeting several partners led variety of workshops including one on intercultural competence which created a superb discussion between all partners. In March the 2nd project meeting will be held in Lousada hosted by the AFA Lousada. Our two day project meeting will be attended by representatives from Austria, Great Britain, Italy and Croatia to develop further project aims and outcomes.